How Ethical Advertising Will Transform the Blockchain Industry

CodeFund is an ethical ad platform that funds contributors to the open source ecosystem. Visit CodeFund to learn more and apply.

The Conflicting Relationship Between Blockchain and Marketing¶

In the initial years following Bitcoin’s inception, most blockchain companies didn’t need paid advertising. The early adopters were a community of cypherpunks, libertarians, developers, miners, and hobbyists, that truly believed in the power of decentralized networks. To them, adoption was inevitable, and rather than putting paid ads in front of the general public, resources were better spent building wallets, development tools, infrastructure, and scalability solutions.

Additionally, almost all early blockchain users and entrepreneurs were extremely privacy-conscious. Pseudonymity is a key component to cryptocurrencies, they wouldn’t work in a permissionless manner without it. The Adtech industry, on the other hand, is run by monolithic centralized powerhouses that gather and store immense amounts of personal data for precise targeting. For the first 5 years of Bitcoin, the blockchain community ethos was quite literally the polar opposite of the advertising industry.

That’s not to say that in the early days exchanges, wallets, and other blockchain services were unable to run successful marketing campaigns. However, the community was generally so niche that most users had a good sense of what they were looking for. The famous cliche, “If you build it, they will come” is frequently repeated in this space. While it was arguably true for Bitcoin, the internet, and certain decentralized protocols, the data shows that marketing is often crucial for launching a business or community built on top of these networks.

Following the launch of Ethereum, the rise of smart contracts, and the ICO mania, things changed. All of a sudden it was relatively easy for startups to launch their own token and rake in millions with a whitepaper. As a result, marketing budgets began to skyrocket and paid campaigns were everywhere due to the (seemingly) huge potential for capital accumulation.

While some genuinely revolutionary ideas were started and funded during this time, the vast majority were subpar projects and outright fraudulent scams preying on naive users. At one point Coinmarketcap, a fairly well-regarded website in the crypto space, was showing ads for Bitconnect, a known Ponzi scheme. 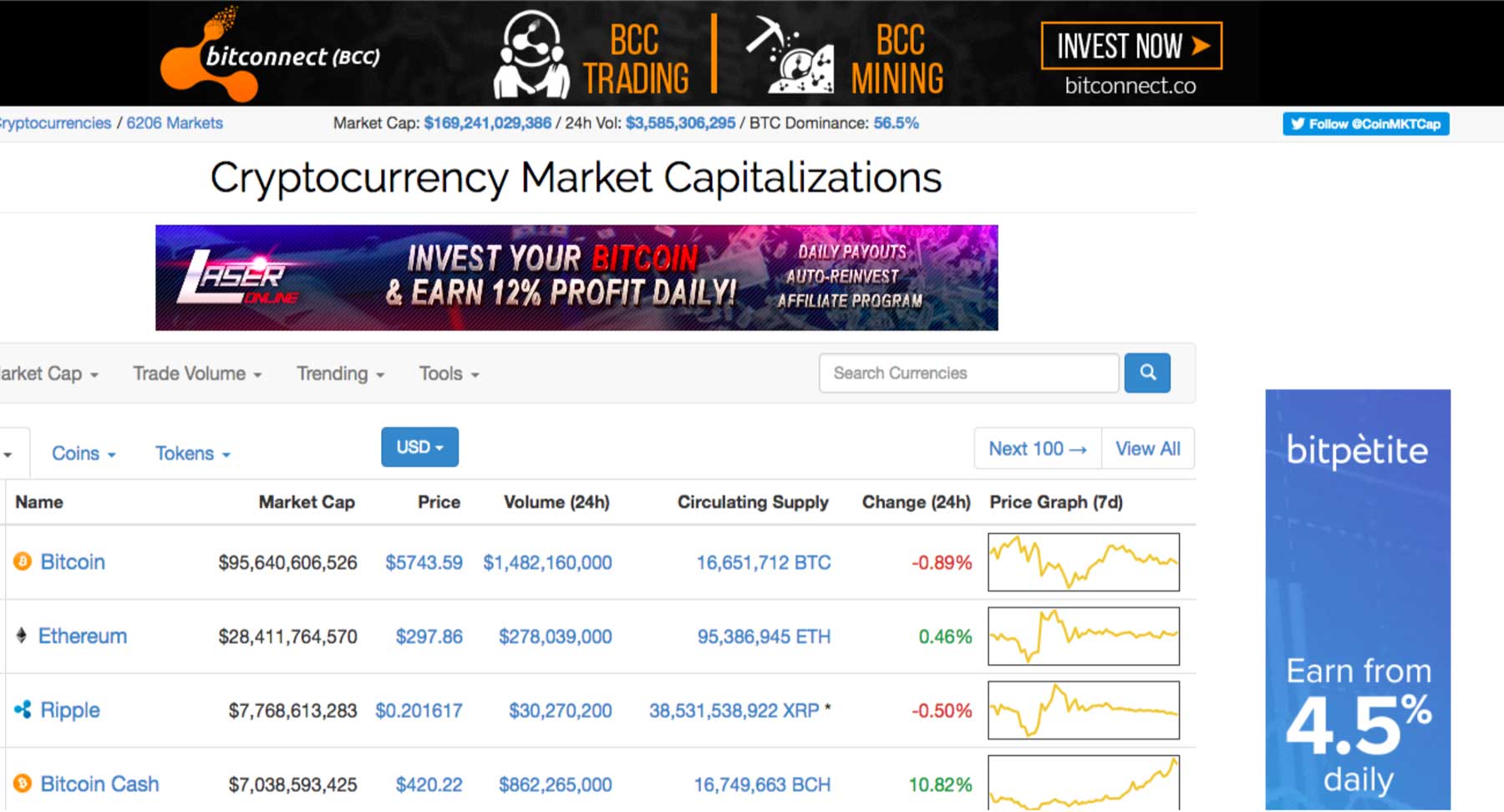 As a result, most mainstream ad providers like Google and Facebook banned all ads pertaining to crypto. Some people in the blockchain industry thought this was unfair, but it was for good reason. Scammy projects were ruining the public perception of blockchain technology. However, reputable companies were also caught in the crossfire, finding it increasingly difficult to advertise their projects. Notably, Mailchimp’s blockchain ban impacted a project I was working on along with plenty of other startups. I remember when Evan Van Ness’ twitter and Week in Ethereum newsletter (my favorite Ethereum educational resource) were shut down multiple times. 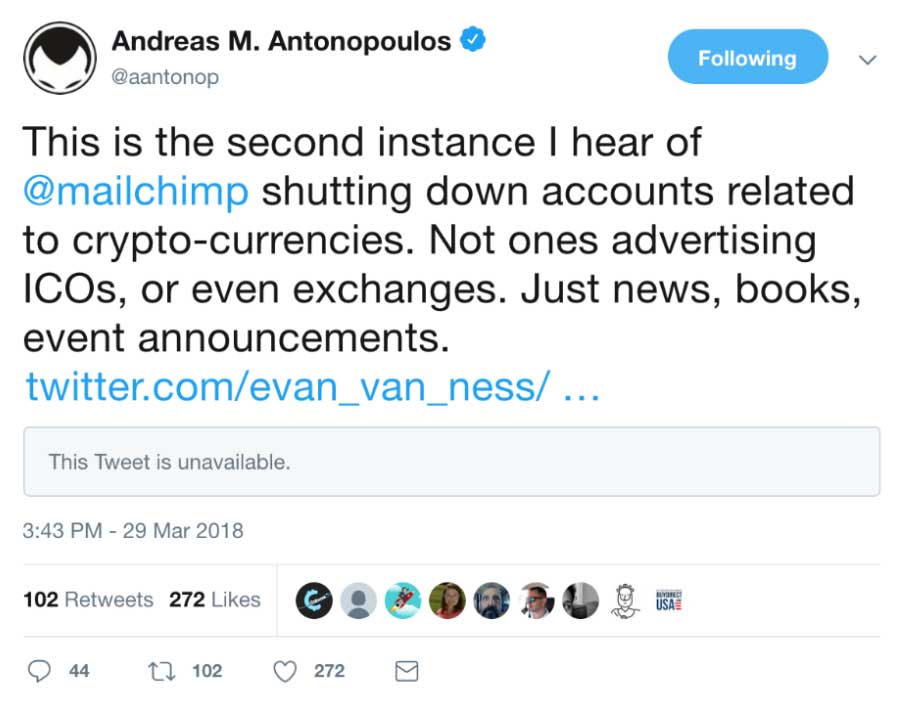 So, what’s the solution? Fortunately, the majority of mainstream advertising services have relaxed their bans on blockchain advertising in the face of a maturing ecosystem. This is especially interesting when considering that both Google and Facebook have announced their foray into the industry.

We recently released a blog post covering a variety of different free and paid channels to advertise your blockchain startup. And although there are more options than ever, there are still several obstacles to overcome. As we appear to be approaching the next bull market, scams will undoubtedly come back (I’ve already seen a huge uptick in the “free crypto” scams on twitter). Further, the crypto ecosystem hasn’t addressed the problems of mass data collection and rampant user profiling in the Adtech world. Most of us believe blockchain will be the catalyst for a revolution of privacy and self-sovereign identity, hopefully breaking up the big data monopolies of web2. Yet the entrepreneurs and thought leaders pushing this narrative of individual autonomy and privacy in the digital age are still using advertising services that track, profile, and collect mass amounts of data from their target markets. Marketing is inevitable - startups need to reach their desired audience and grow a user base. But can this be done in a more ethical way, in line with the ethos of this technology we love and support?

While all of this craziness was happening in the blockchain world, Eric Berry was focused on tackling a different problem: The Open Source Conundrum. Open source software lays the foundation for the Internet as we know it and supports so much of our global business processes, yet comparatively receives very little support and funding. How can we help open source projects and maintainers get consistent financial support?

At CodeFund, we pride ourselves on showing ethical ads on developer websites, acknowledging and respecting individual privacy. This means that our ads do not track, use cookies, nor collect any data except for IP addresses and browser agents. We feel ads that track our browsing history and know our personal information are an invasion of privacy, and from our research, the majority of our user base feels the same way. So while we can't profile and target specific demographics and individuals, we can help you tailor your ads to the desired audience and display them on sites that your audience frequents with geotargeting. Users will see ads that they actually want to see without compromising their data, browsing history, or personal information.

CodeFund is 100% open source (feel free to contribute! 😄) and was built by developers for developers, so we understand the motivations of our users. We keep our content relevant by only showing high-quality ads from companies that are of interest to the audience. We diligently vet all advertisers and publishers to make sure they are a good fit for the network. By understanding the community and showing them ads relevant to their interests, you build trust between your advertisers, publishers, and most importantly, users.

The CodeFund model is a bit unorthodox in the Adtech world. However, we find it to be extremely successful in our niche (and growing) open source community. Developers are typically much more likely to use ad blockers compared to typical Internet users. Developers are also known to be more concerned about privacy and data collection. For these reasons, they can often be hard to reach with advertising. To get your message seen, you need reputable publishers who are trusted by their audience. CodeFund is bound by the standards set by acceptable ads, which means many ad blockers do not block us. We work with our users to allow our ads and make sure they are relevant to the audience, ensuring all parties involved are benefiting. 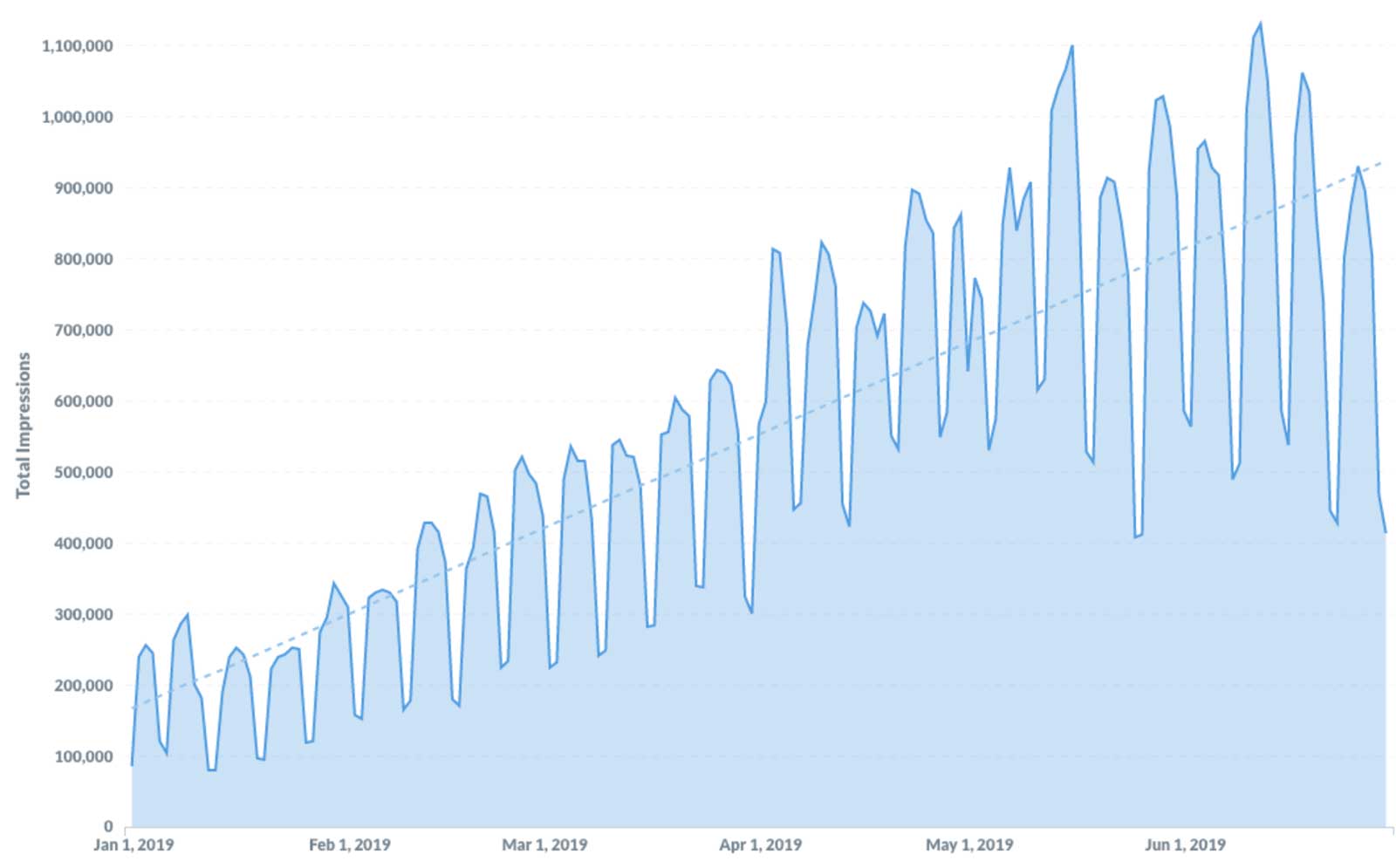 We believe the future of the web will be a privacy-focused, user-driven evolution. More scandals are emerging from large corporations revealing data mismanagement, leaks, and hacks of sensitive information. Digital advertising will never go away, but the average internet user is becoming more security and privacy conscious, and we think this will lead to an increased demand for ethical advertising products. That's why we built a platform to allow advertisers to get their message to the right audience without compromising user integrity.

Initially CodeFund was not focused on the blockchain space, however, since joining Gitcoin, we’ve been expanding our offerings. We realized that ethical advertising is going to play a crucial role in Web3, blockchain, open source, and the future of the Internet - and that's something we want to support.

Blockchain technology was undeniably born out of the open source ecosystem. While the two communities are not exactly the same, they share many morals and have significant overlap. By nature, blockchain and cryptocurrencies would be useless if they were not open source. A key feature of decentralized cryptocurrencies is that there is no need to trust an intermediary and no barriers to entry. For it to work, anyone must be able to run, review, and contribute to the code. Today's leading blockchains are a cumulation of hundreds, if not thousands of individuals contributing to open source code bases.

CodeFund ensures that the blockchain projects we work with are building applications and tools for open source blockchains, primarily for Ethereum. We don’t work with projects pumping their own token sales, instead, we partner with blockchain companies that are adding value to society and the open source ecosystem.

For the next few months, CodeFund will be actively building out our blockchain publisher and advertiser networks. We are currently publishing ads on Etherscan, State of the Dapps, Etherchain, Decrypt Media, Coingecko, and a handful of other high-quality blockchain websites - with even more in the pipeline. Decrypt just release a great piece on the problems with crypto “news” sites, and their motivations for advertising ethically. Our advertisers like Truffle are happy with their results so far and have seen high conversion rates from their campaigns, without sacrificing the privacy and integrity of their audience. 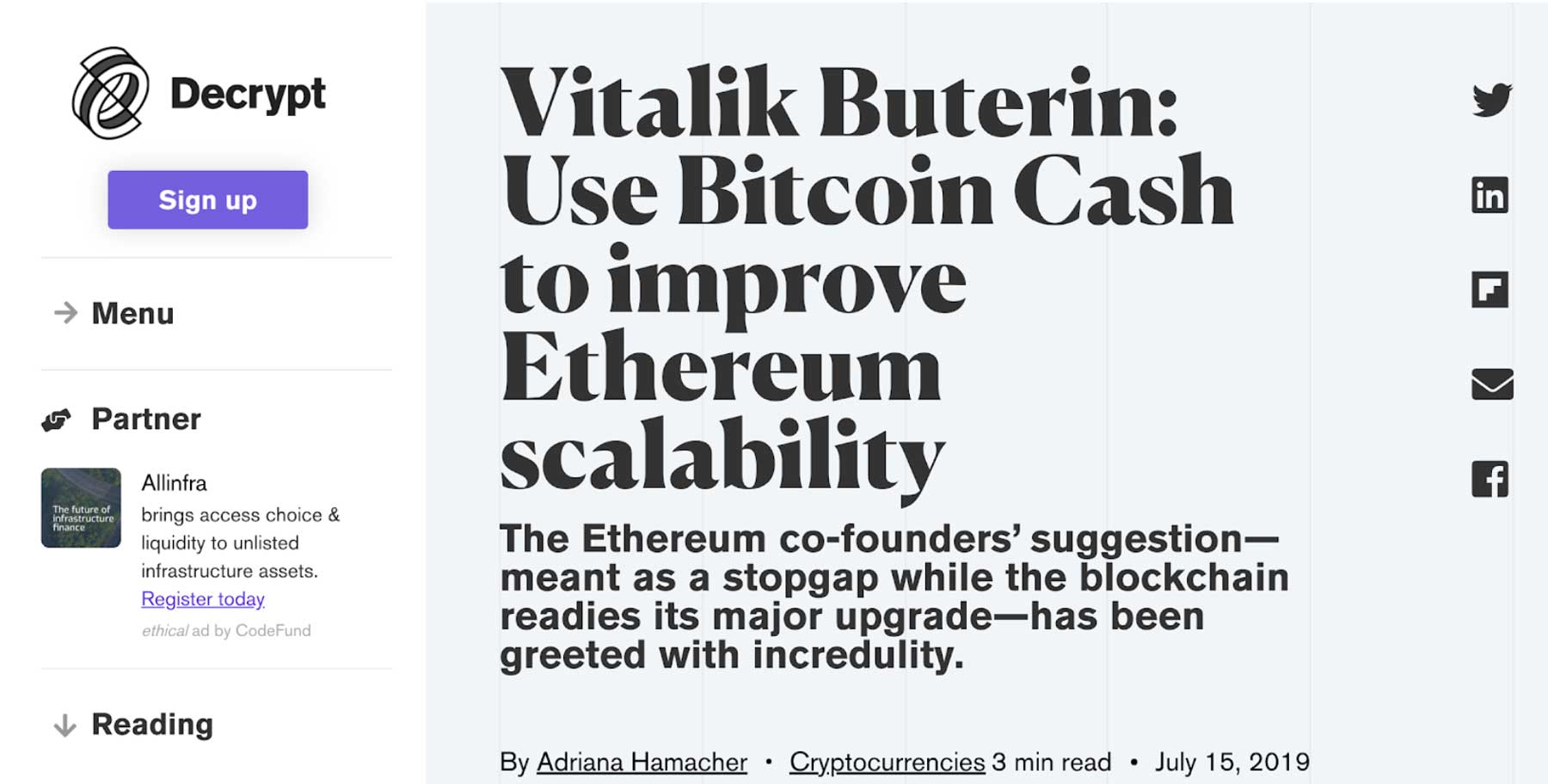 Crypto markets are beginning to turn around, more startups are shipping products, and the global blockchain community is growing. We expect this trend to continue, driving the demand for blockchain advertising as a result. Many blockchain websites publishing ads see it as a necessary evil – they need to keep the lights on to continue providing their services, but feel their choices are limited.

The first option is working with companies to run direct advertising campaigns. However, this approach consumes time and resources and can be risky if advertisers pull out. The second option, and perhaps the easiest, is to use Google Ads or another incumbent service. Using this approach, many feel they’re compromising users’ privacy and trust. Moreover, outsourcing to huge Adtech giants is part of the problem that made ICO scams so rampant in 2018-2019. These companies simply have far too much traffic and lack the specialized skill set required to manually vet every single advertiser and identify blockchain scams. The last thing publishers want on their website is an ad that loses your users' money or promotes the purchasing of unregistered securities.

At Gitcoin and CodeFund, we are a small team that has been in the blockchain world for years. We view every publisher and advertiser as a partner, diligently vet them, and hold them to the highest standards. We’d like to see ethical advertising become the new standard in the blockchain space, and eventually on the Internet as a whole.

If your blockchain company is interested in advertising to a high-quality audience, or you would like to earn passive income showing relevant ads on your website without sacrificing your community’s privacy, CodeFund is for you! Apply now on the CodeFund landing page and we’ll be in touch, or reach out to [email protected] for more information.