**Update**: While this tutorial was originally written for Truffle 3, we have updated it to be fully compatible with newer versions of Truffle. We have kept some of the language unaltered, except where necessary.

Truffle 3 is out and switched to less opinionated build process that allows any build pipeline to be plugged in. We're going to take advantage of that feature today, and build a frontend app with a custom pipeline.

This is written for those familiar with Truffle and Ethereum, who want a sense of how to structure a frontend application for easy development and testing. This example uses webpack, but familiarity with other build tools is enough background.

What does a build process need to do in Truffle?¶

In general, simple: Turn all higher level code (like ES6, SASS, JSX, templates, etc.) into vanilla JavaScript/HTML/CSS artifacts, and then move those artifacts into the build/ folder alongside our contract artifacts.

Uses webpack to compile the application's frontend code and move the artifacts into the build/ folder.

Once you have Truffle installed, run truffle unbox webpack in an empty directory to pull down the Truffle Box for this tutorial. If you're familiar with the MetaCoin Truffle Box), you'll notice your old friends Metacoin.sol and ConvertLib.sol are there. But now, running truffle build does this:

That's ok! Truffle is getting out of your way and letting you control the build process. Our new process is specified in webpack.config.js. More on this later.

In order to interact with contracts, we need them deployed on a network! The default network is configured in truffle.js:

This is the default setting for Ganache, though you can change this to use any connection you'd like.

**Note**: Read more about [setting up Ganache](/docs/ganache/quickstart). You can also use [Truffle Develop](/docs/truffle/getting-started/using-truffle-develop-and-the-console), which launches a personal blockchain for testing and is built directly into Truffle, no separate installation required.

Let's get the contracts on the network:

First run truffle compile. This will compile the .sol contracts into .json artifacts (specified in the @truffle/contract library). They will appear in build/contracts/*.json. Now we can include contracts in our app with a simple import or require statement:

Next, make sure you have a blockchain running, and then run truffle migrate. This will deploy the contracts onto the default network running at 127.0.0.1:7545.

All that's left is to use webpack to compile the app and place it in the build/ folder. A simple npm run dev and we're done! This will build the app and serve it on http://127.0.0.1:8080. Relevant configs here:

You can find more information on webpack concepts on webpack's website. Notice we didn't have to use webpack here, but Truffle comes with a handy webpack demo that gets us started quickly. We could replace the webpack config with a Gruntfile, for instance, and use Grunt instead. Truffle don't care no mo'.

As previously mentioned, the command npm run dev builds the app and serves it with a local web server. (This is equivalent to running npm run build and then truffle serve, but we've done it in one step for convenience.) To see it, navigate to http://127.0.0.1:8080. You should see: 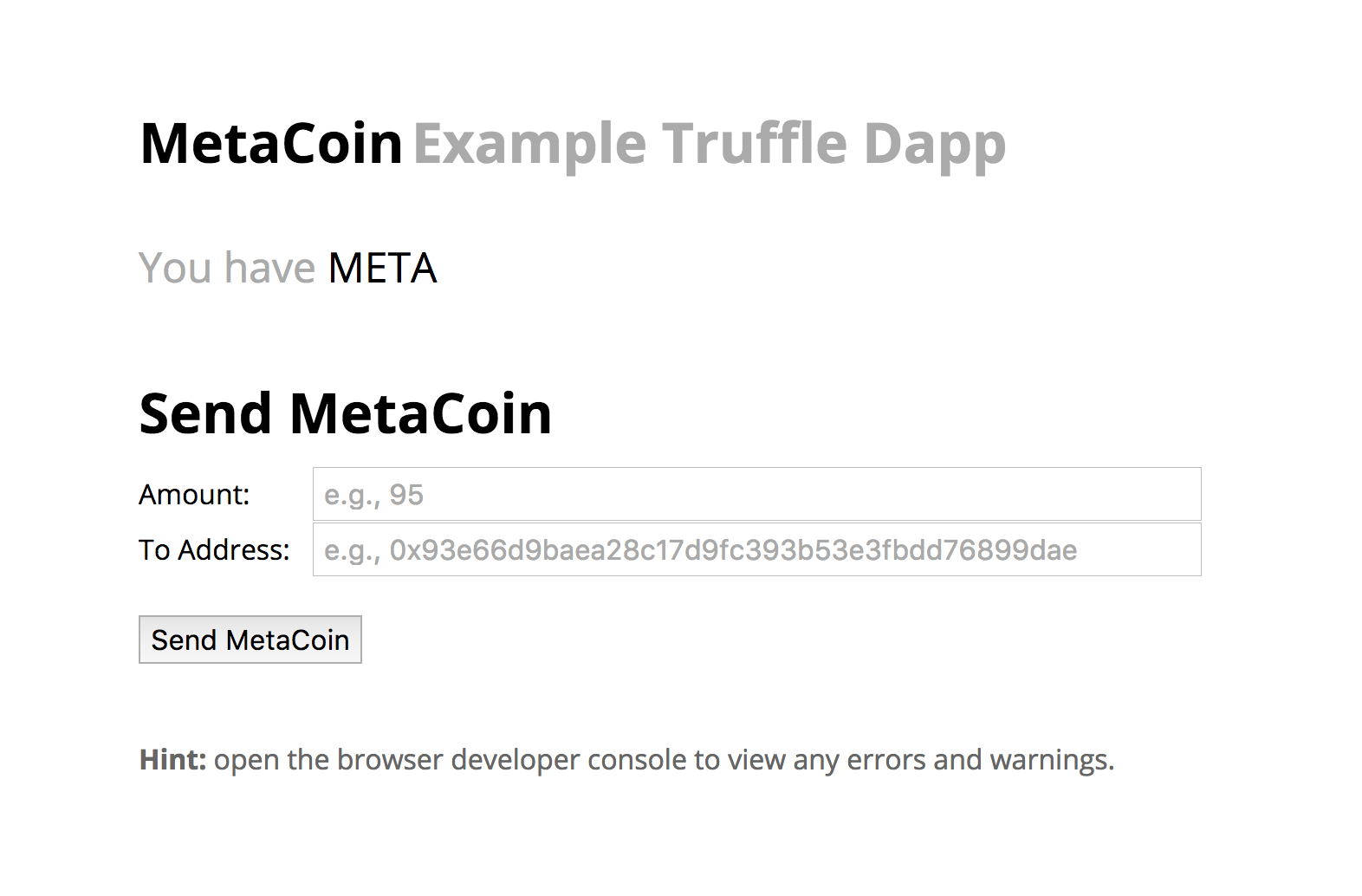 That's it, all done! Happy Truffling!

If you want to see how to deploy a frontend app using Docker and Travis build pipeline, check out my frontend example for added goodness.