The integrated Solidity debugger in Truffle is a powerful tool for inspecting your contracts.

When initially released, the debugger had the ability to to step through Solidity code, but that was it.

But development has continued apace, and new functionality has been added to make your contract inspection more powerful. Specifically, you now have the ability to perform variable inspection on your contracts. With this, you can know exactly the state of your variables at every given point in the instruction list, giving you a much greater ability to truly inhabit the current state of your contracts, and making debugging a breeze.

In this tutorial, we're going to take a look at a simple contract and inspect it using the Truffle Solidity debugger. We'll investigate three scenarios:

The Fibonacci sequence is an integer sequence where each successive number in the sequence is the sum of the two previous numbers.

With the first two numbers set to 1, you can determine every number in the sequence through iteration.

The Fibonacci sequence is related to the "golden ratio", which is found in certain areas of nature, such as governing the the arrangement of leaves on branches and petals on flowers. 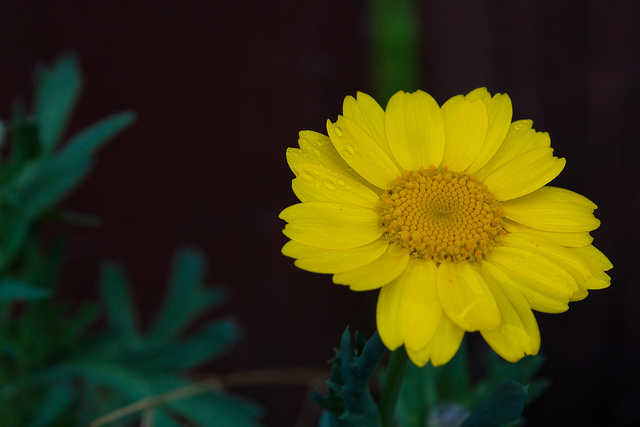 Generating the Fibonacci sequence with a smart contract can show off the debugger and its variable inspection without getting too bogged down in details. Let's do it.

Let's take a look at this contract to see what's going on with it:

This file allows us to deploy the Fibonacci contract (shown above) to the blockchain. 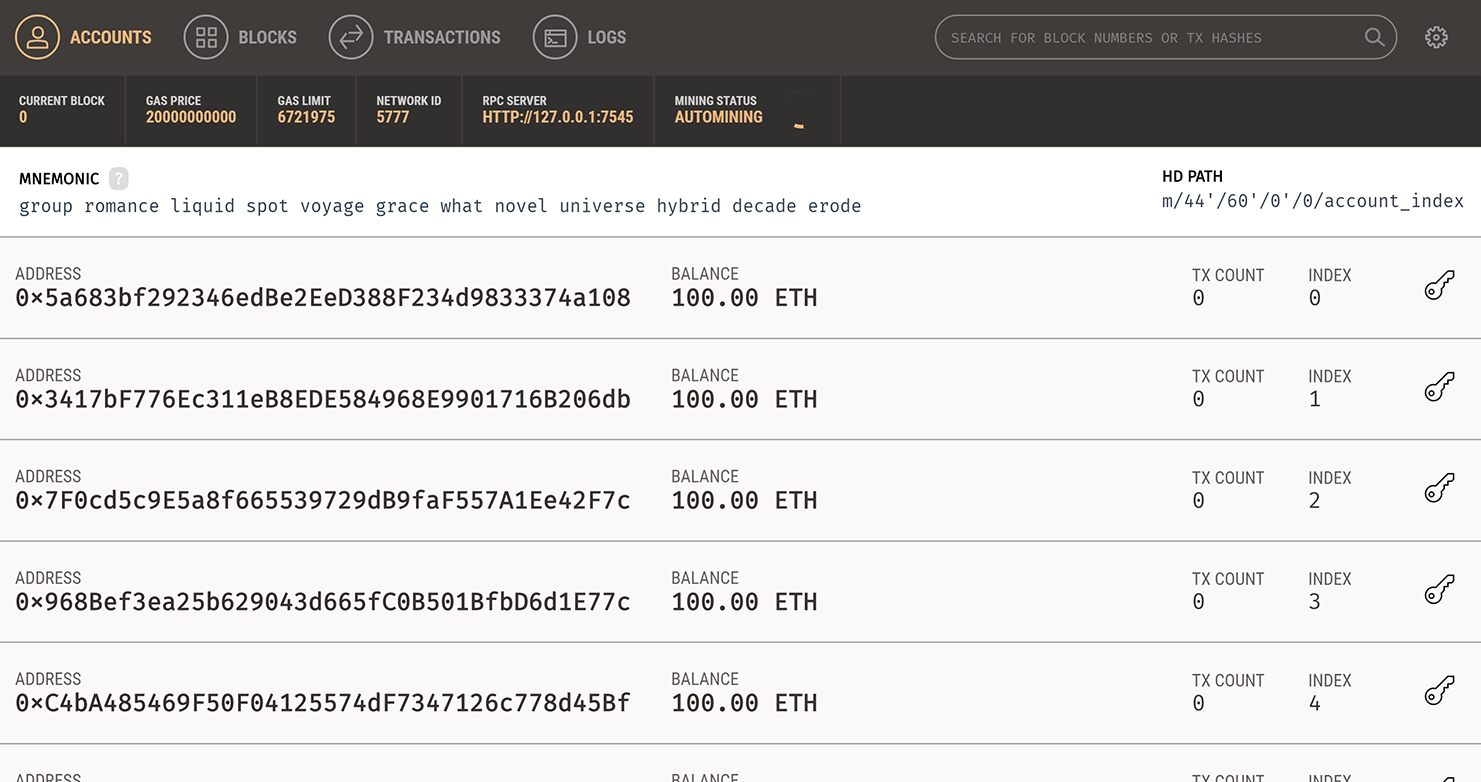 Note: You can also run this tutorial with [Truffle Develop](/docs/truffle/getting-started/using-truffle-develop-and-the-console) and the results will be the same.

This allows us to connect our project to Ganache.

You will see a prompt:

We'll run all of our commands from here.

You should see the following output:

Note: Make sure to examine the output for any errors or warnings.

You will see output that looks like this, though the addresses and transaction IDs will be different:

Interacting with the basic smart contract¶

Our contract is now on the blockchain. Ganache has automatically mined the transactions that came from the contract call and creation, as you can see by clicking the "Transactions" button in Ganache: 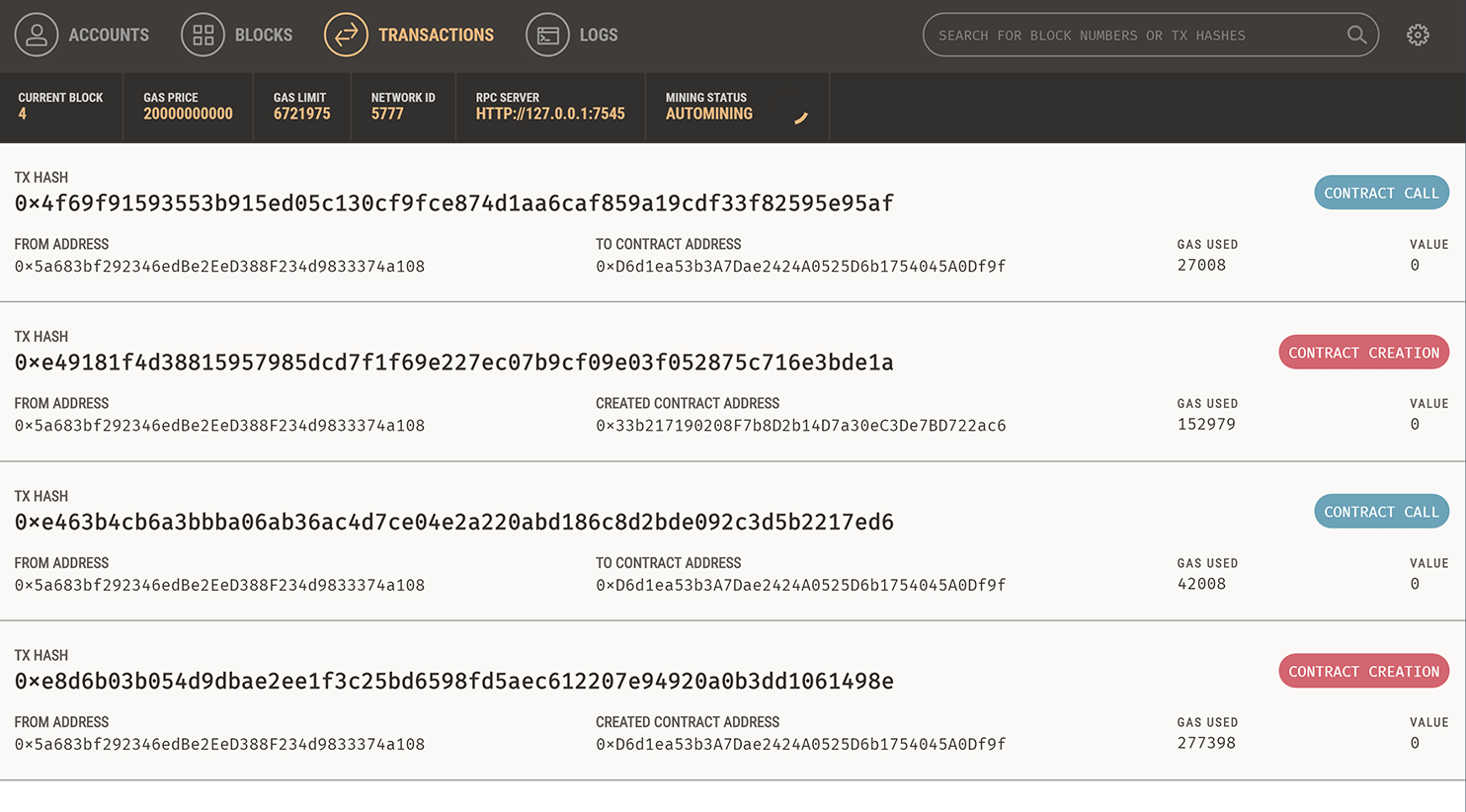 Now it's time to interact with the contract. First we'll check to make sure that it's working correctly.

Before we run the command, let's take a look at it in greater detail. Displayed in a more easily-readable manner, it reads:

This command uses JavaScript promises. Specifically, the command says that given a deployed version of the Fibonacci contract, run an instance of that contract, and then run the generateFib function from that contract, passing it the argument 10.

The important part of this output for us is the transaction ID (listed as the value of tx:). Because even though we've run our function, we don't actually know what happened. Did it work correctly? Did something unexpected happen? We'll need the Truffle Solidity debugger to find out.

Note: Your transaction ID will be different from the above.

You can debug a transaction in the Truffle console by typing debug <transactionID>. We'll now do just that.

Note: Your transaction ID will be different. Do not copy the above example exactly.

This will enter the debugger. You will see the following output:

Here we see one empty array. The arry fibseries will have the n numbers in the Fibonacci sequence.

This instruction moves on to the initial seeding of the fibseries variable.

Now we see three variables, our fibseries array and two others:

Here we see that n has been passed the value from the contract, while i hasn't received its value from the for loop yet, since we haven't gotten to that part of the function.

Notice that after the current instruction, the watched variables are displayed automatically.

This will output as follows:

Now we'll only be watching the single expression comprising the two variables.

Notice that we have now populated the first entry in the sequence.

Here we see that we have populated the first two entries in the sequence.

Now that we have two entries in our sequence, we've moved into our for loop.

It can be verified that this is the correct first ten entries in the Fibonacci sequence.

Our contract as we have created it is working as expected. That's great, but we can't always get so lucky. Sometimes a contract appears to work fine (no errors are thrown) but the output is not what you'd expect. Let's examine that here.

It's amazing what switching a plus sign for a minus sign can do. Instead of the Fibonacci sequence:

(I don't know if this series has a name, so we'll just call it the "Trufflenacci" sequence.)

Let's edit our contract and see what happens.

Note: The `--all` flag with force recompile all of the contracts.

The response will be undefined, because we haven't yet gotten to the point in the code where that array was defined.

The array is defined, but is still empty.

Something seems off here. Obviously, if you were expecting the Fibonacci series, by this point you would realize that you had veered far off course.

But the jump from 0 to 255 should be suspicious too. And in fact, what we're seeing is a buffer underflow, a situation where we have an unsigned integer, which can hold only positive values, being set to less than zero. Specifically, that fourth value is defined as the difference between the previous two elements, so 0 - 1 = -1. Our type is uint8[] which means that each integer in the array is defined by 8 bits, so its maximum value is 2^8 - 1 = 255. Subtract one from zero, and the value "wraps around" to its maximum value.

Assuming this was the series we wanted (and that our minus sign was correct), the way to change this is to change the definition of our fibseries array from uint8[] to int8[]. That would make values "signed integers" and able to accept negative values, giving you an array that would look like this instead:

Sometimes, contracts have errors in them. They may compile just fine, but when you go to use them, problems arise.

This is one of the reasons to use Ganache over a public testnet: you can easily redeploy a contract without any penalty in time or ether.

So we're going to introduce a small error, a misnumbering in our for loop that will cause it to have an invalid index.

You'll see an error, which will start with this:

Well that's not good. Moreover, the output didn't give us a transaction ID to debug, so we're going to need to look elsewhere for it. Thankfully, Ganache can tell us the transaction information.

Note that the contract is failing at the point where it tries to determine the value of fibseries[i-2] But in our debugger, we know that the current value of i is 1, so i-2 is going to be -1 (or actually 2^256 - 1, due to the buffer underflow issue we talked about above, and with i defined as a uint). Since either one of those values are invalid (you can't have a negative index, and the value at index 2^256 - 1 is clearly not defined), the contract halts with an error.

These are just some of the ways that you can use variable inspection to debug your contracts. We're constantly adding functionality of the debugger, so please raise an issue on our Github page or ask a fellow Truffler in our GitHub Discussions. Happy debugging!