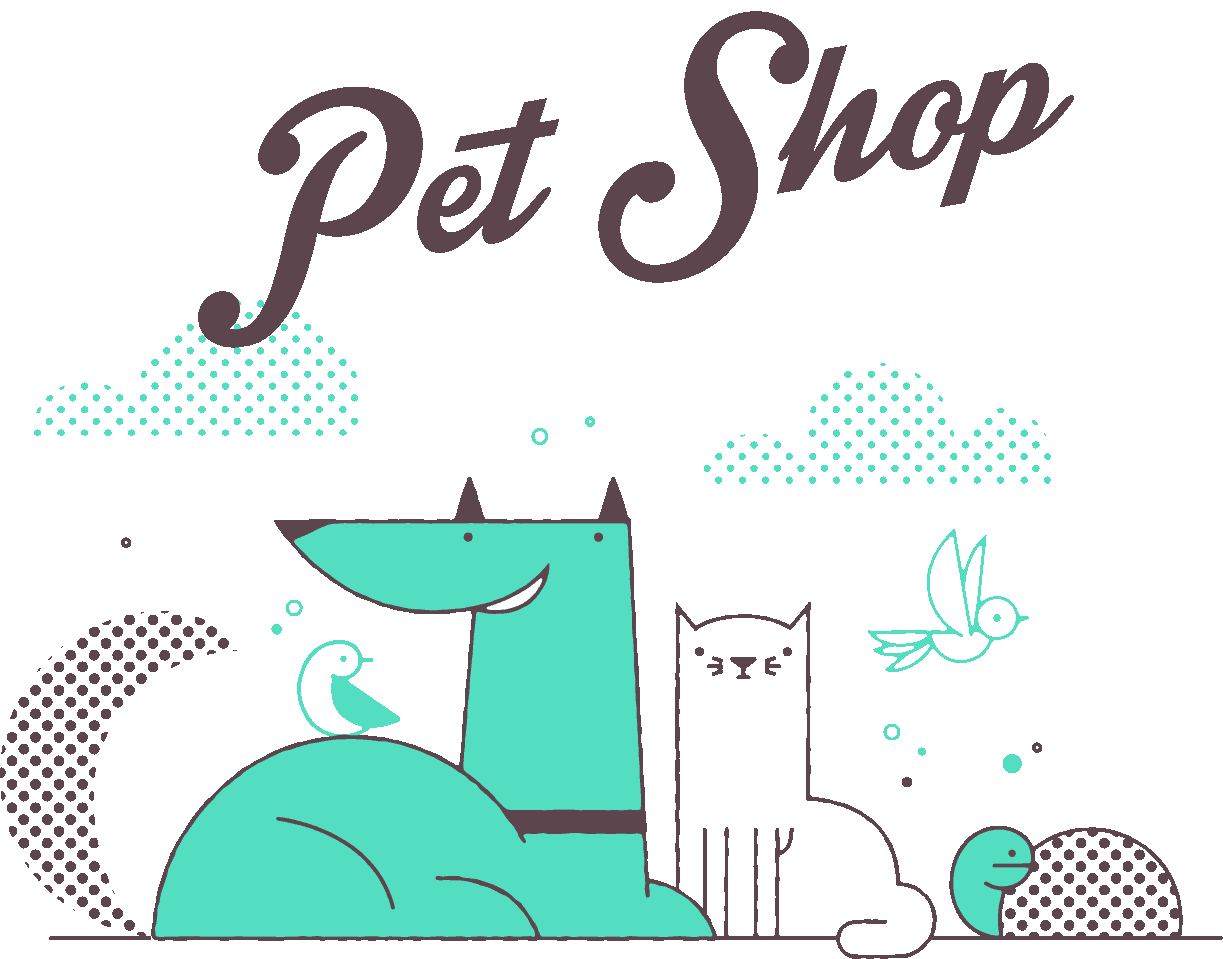 This tutorial will take you through the process of building your first dapp---an adoption tracking system for a pet shop!

This tutorial is meant for those with a basic knowledge of Ethereum and smart contracts, who have some knowledge of HTML and JavaScript, but who are new to dapps.

In this tutorial we will be covering:

Pete Scandlon of Pete's Pet Shop is interested in using Ethereum as an efficient way to handle their pet adoptions. The store has space for 16 pets at a given time, and they already have a database of pets. As an initial proof of concept, Pete wants to see a dapp which associates an Ethereum address with a pet to be adopted.

The website structure and styling will be supplied. Our job is to write the smart contract and front-end logic for its usage.

Setting up the development environment¶

There are a few technical requirements before we start. Please install the following:

Once we have those installed, we only need one command to install Truffle:

To verify that Truffle is installed properly, type truffle version on a terminal. If you see an error, make sure that your npm modules are added to your path.

We also will be using Ganache, a personal blockchain for Ethereum development you can use to deploy contracts, develop applications, and run tests. You can download Ganache by navigating to https://trufflesuite.com/ganache and clicking the "Download" button.

Note: If you are developing in an environment without a graphical interface, you can also use Truffle Develop, Truffle's built-in personal blockchain, instead of Ganache. You will need to change some settings---such as the port the blockchain runs on---to adapt the tutorial for Truffle Develop.

Note: Truffle can be initialized a few different ways. Another useful initialization command is `truffle init`, which creates an empty Truffle project with no example contracts included. For more information, please see the documentation on Creating a project.

The pet-shop Truffle Box has extra files and folders in it, but we won't worry about those just yet.

We'll start our dapp by writing the smart contract that acts as the back-end logic and storage.

Solidity is a statically-typed language, meaning data types like strings, integers, and arrays must be defined. Solidity has a unique type called an address. Addresses are Ethereum addresses, stored as 20 byte values. Every account and smart contract on the Ethereum blockchain has an address and can send and receive Ether to and from this address.

Your first function: Adopting a pet¶

Your second function: Retrieving the adopters¶

As mentioned above, array getters return only a single value from a given key. Our UI needs to update all pet adoption statuses, but making 16 API calls is not ideal. So our next step is to write a function to return the entire array.

Compiling and migrating the smart contract¶

Now that we have written our smart contract, the next steps are to compile and migrate it.

Solidity is a compiled language, meaning we need to compile our Solidity to bytecode for the Ethereum Virtual Machine (EVM) to execute. Think of it as translating our human-readable Solidity into something the EVM understands.

Note: If you're on Windows and encountering problems running this command, please see the documentation on resolving naming conflicts on Windows.

Now that we've successfully compiled our contracts, it's time to migrate them to the blockchain!

A migration is a deployment script meant to alter the state of your application's contracts, moving it from one state to the next. For the first migration, you might just be deploying new code, but over time, other migrations might move data around or replace a contract with a new one.

Note: Read more about migrations in the Truffle documentation.

You'll see one JavaScript file already in the migrations/ directory: 1_initial_migration.js. This handles deploying the Migrations.sol contract to observe subsequent smart contract migrations, and ensures we don't double-migrate unchanged contracts in the future.

Now we are ready to create our own migration script.

Note: Read more about Ganache in the Truffle documentation.

You can see the migrations being executed in order, followed by some information related to each migration. (Your information will differ.)

You've now written your first smart contract and deployed it to a locally running blockchain. It's time to interact with our smart contract now to make sure it does what we want.

Creating a user interface to interact with the smart contract¶

Now that we've created the smart contract, deployed it to our local test blockchain and confirmed we can interact with it via the console, it's time to create a UI so that Pete has something to use for his pet shop!

Included with the pet-shop Truffle Box was code for the app's front-end. That code exists within the src/ directory.

The front-end doesn't use a build system (webpack, grunt, etc.) to be as easy as possible to get started. The structure of the app is already there; we'll be filling in the functions which are unique to Ethereum. This way, you can take this knowledge and apply it to your own front-end development.

Now that we can interact with Ethereum via web3, we need to instantiate our smart contract so web3 knows where to find it and how it works. Truffle has a library to help with this called @truffle/contract. It keeps information about the contract in sync with migrations, so you don't need to change the contract's deployed address manually.

Getting The Adopted Pets and Updating The UI¶

Interacting with the dapp in a browser¶

Now we're ready to use our dapp!

The easiest way to interact with our dapp in a browser is through MetaMask, a browser extension for both Chrome and Firefox. 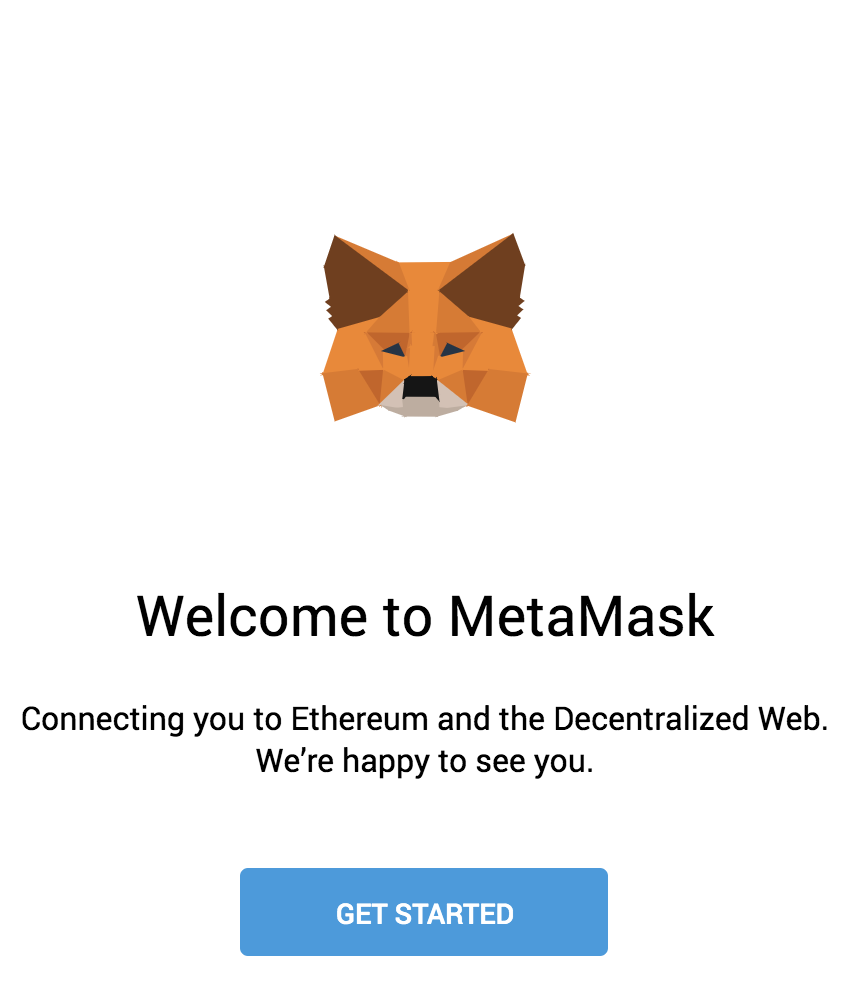 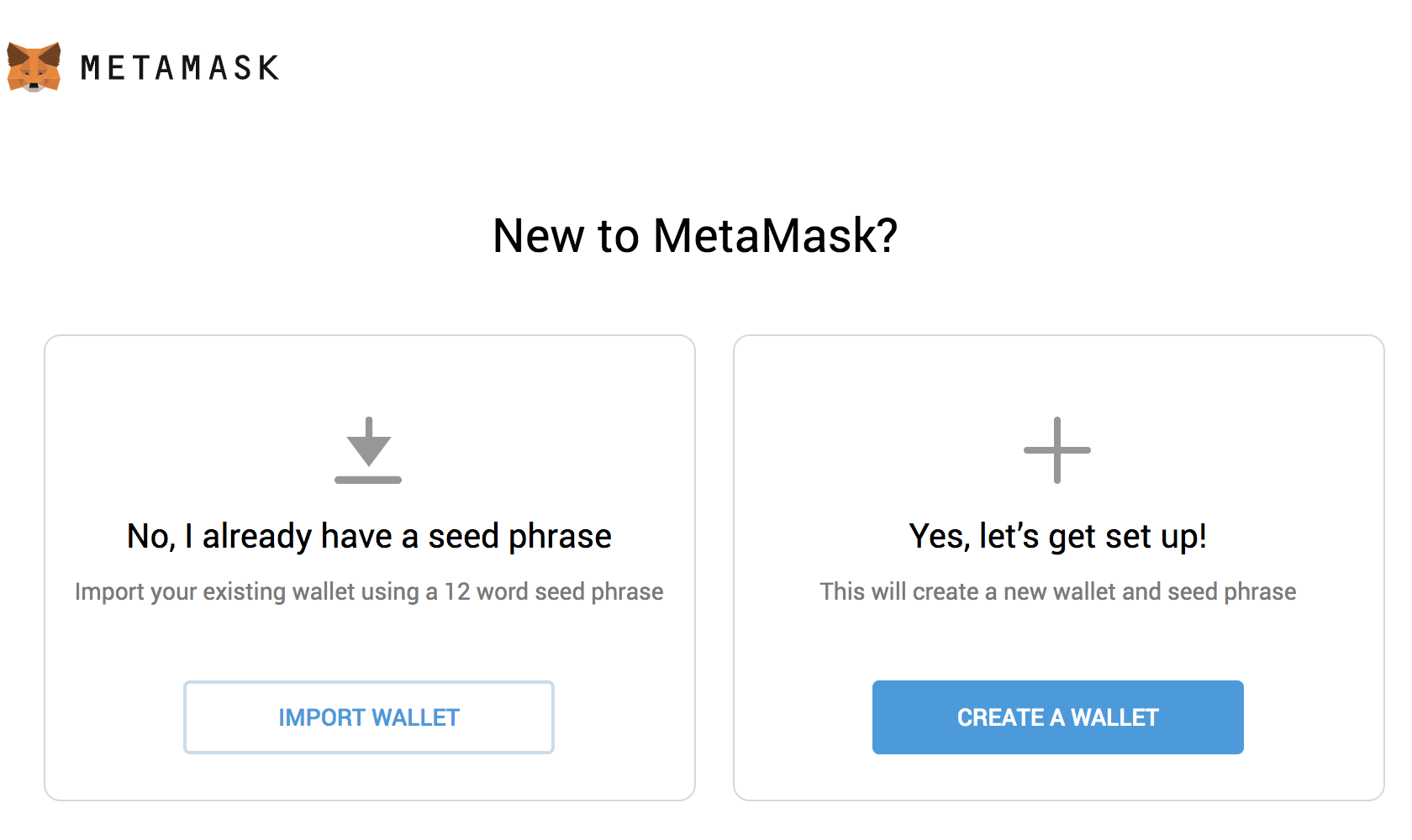 **Warning**: Do not use this mnemonic on the main Ethereum network (mainnet). If you send ETH to any account generated from this mnemonic, you will lose it all! 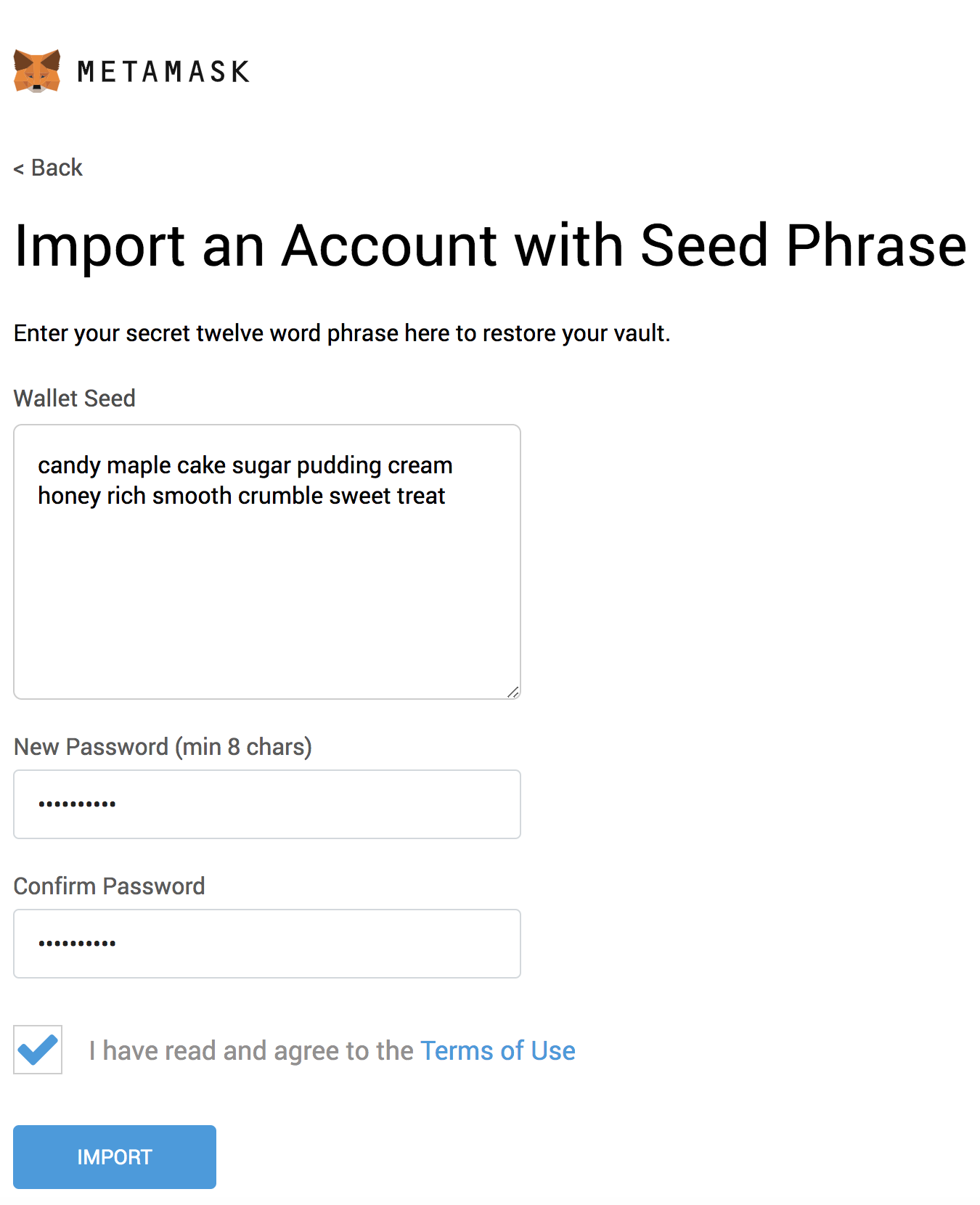 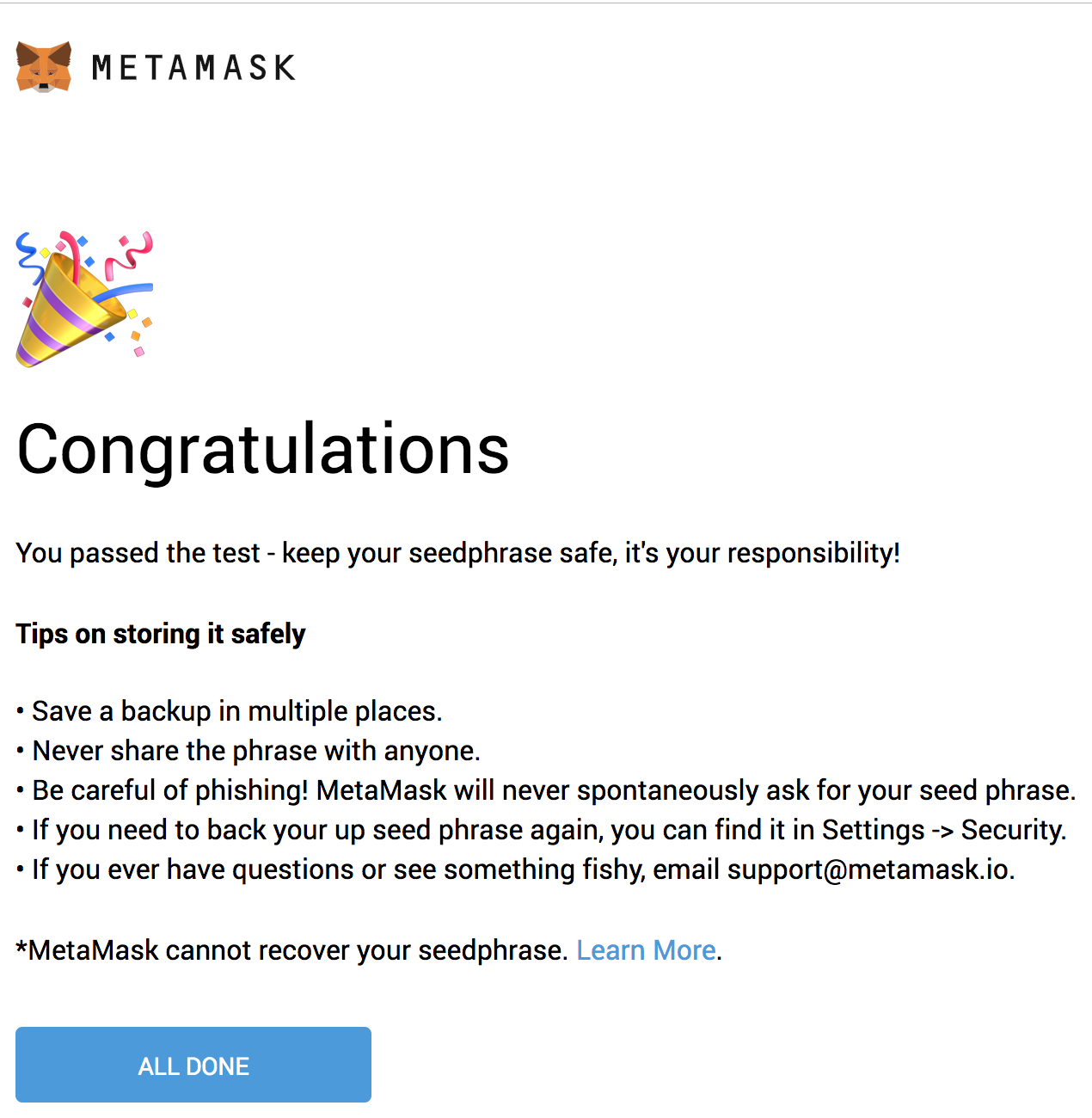 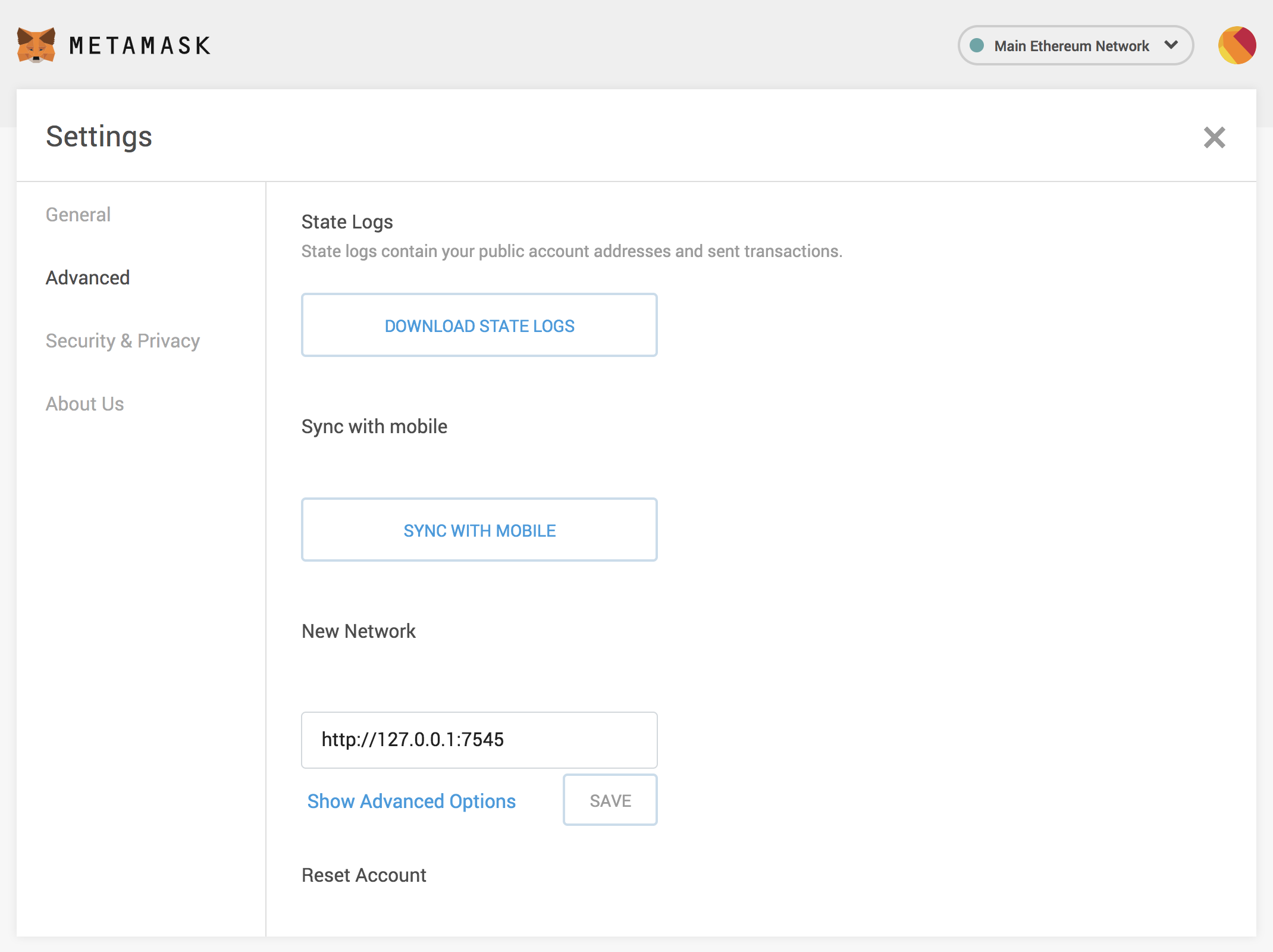 Each account created by Ganache is given 100 ether. You'll notice it's slightly less on the first account because some gas was used when the contract itself was deployed and when the tests were run. 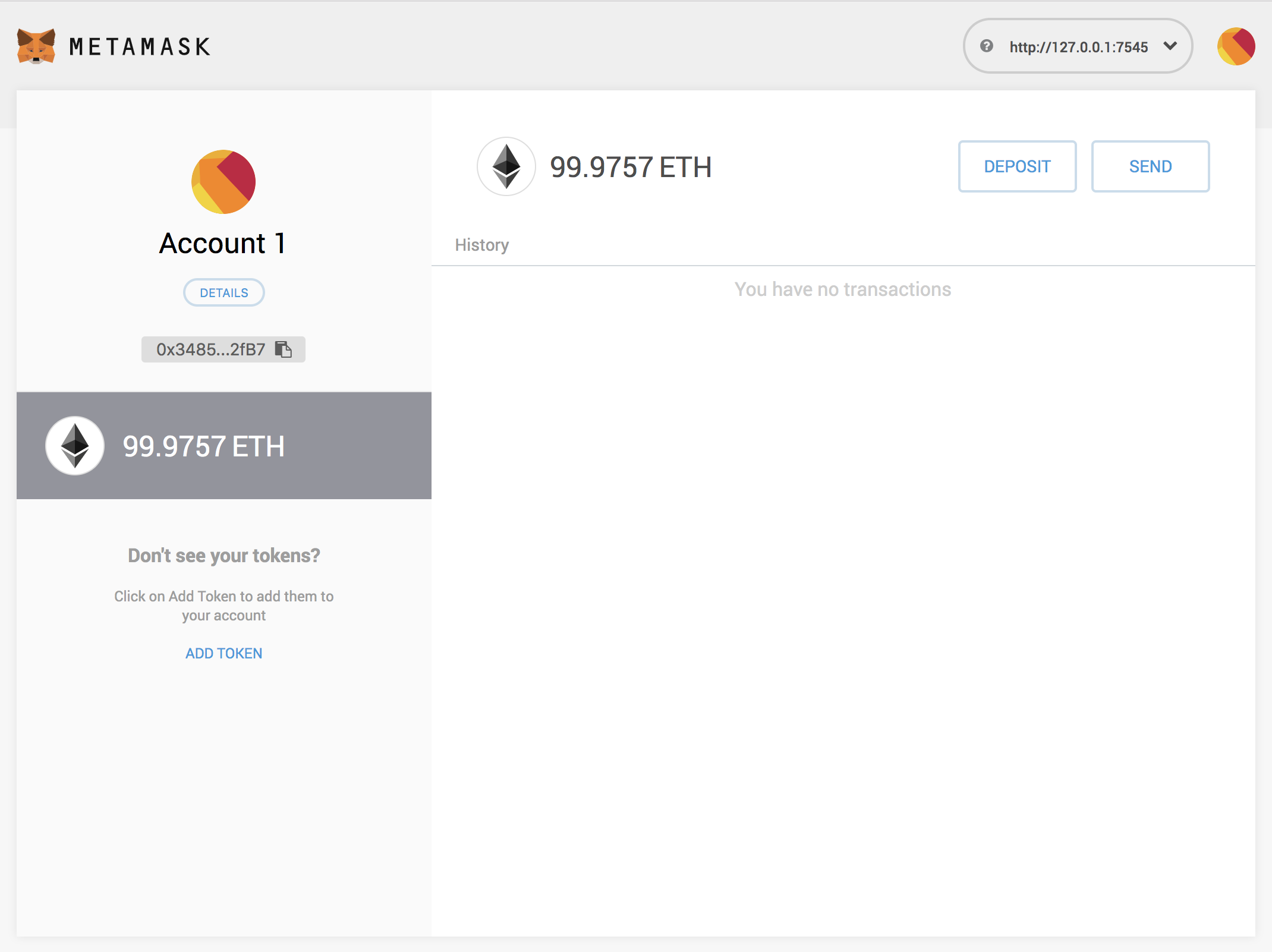 We can now start a local web server and use the dapp. We're using the lite-server library to serve our static files. This shipped with the pet-shop Truffle Box, but let's take a look at how it works.

This tells lite-server which files to include in our base directory. We add the ./src directory for our website files and ./build/contracts directory for the contract artifacts.

We've also added a dev command to the scripts object in the package.json file in the project's root directory. The scripts object allows us to alias console commands to a single npm command. In this case we're just doing a single command, but it's possible to have more complex configurations. Here's what yours should look like:

This tells npm to run our local install of lite-server when we execute npm run dev from the console.

The dev server will launch and automatically open a new browser tab containing your dapp. 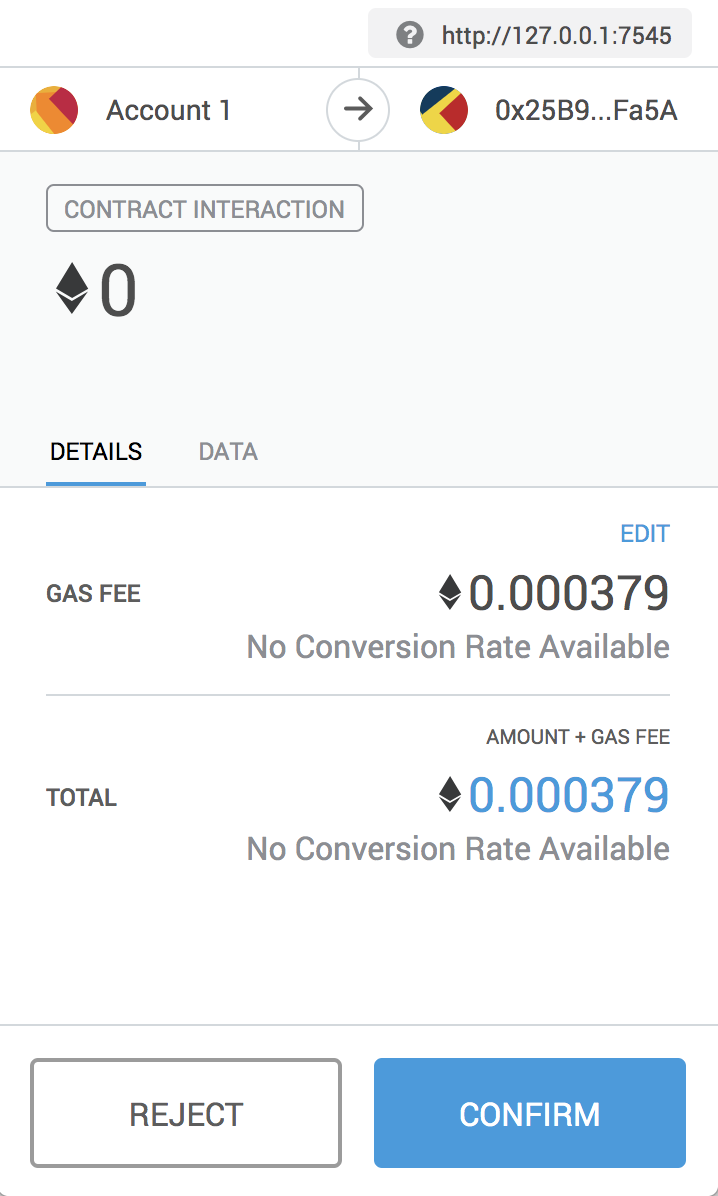 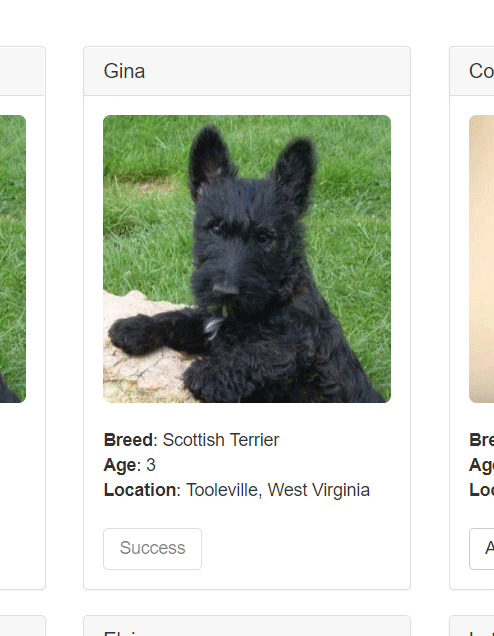 Note: If the button doesn't automatically change to say "Success", refreshing the app in the browser should trigger it.

And in MetaMask, you'll see the transaction listed: 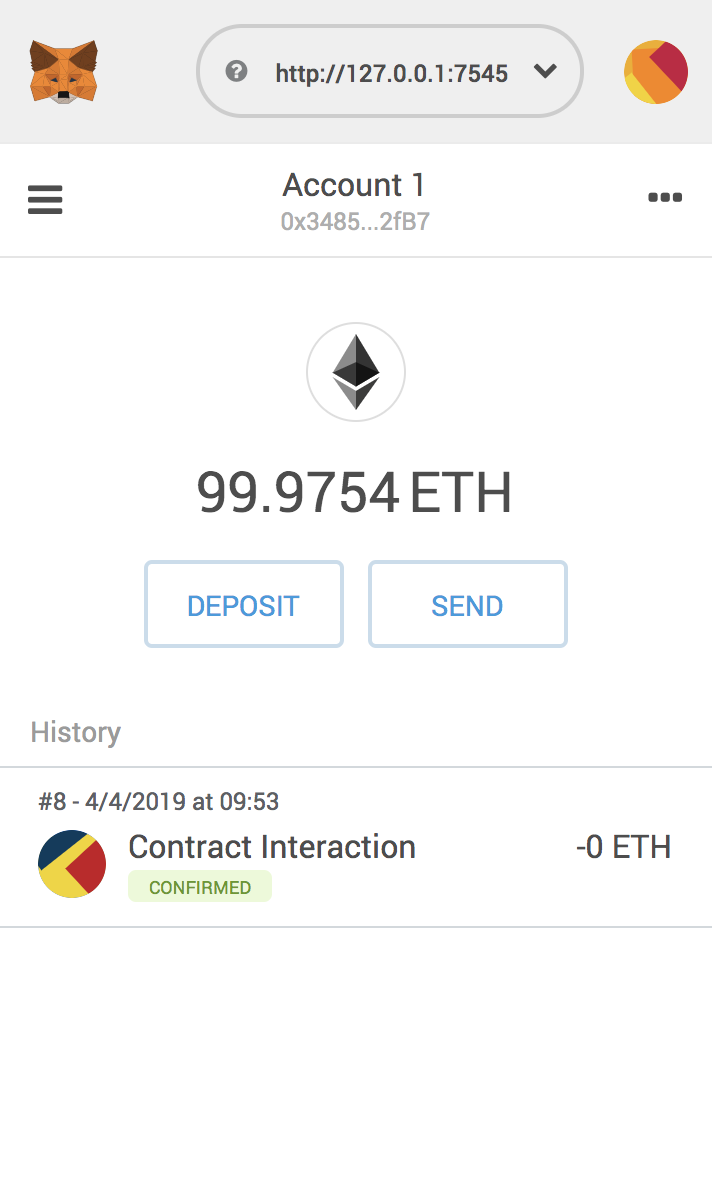 You'll also see the same transaction listed in Ganache under the "Transactions" section.

Congratulations! You have taken a huge step to becoming a full-fledged dapp developer. For developing locally, you have all the tools you need to start making more advanced dapps. If you'd like to make your dapp live for others to use, stay tuned for our future tutorial on deploying to the Ropsten testnet.